What are ovarian cysts?

A cyst is a closed sac which occurs in the body’s tissue – in the case of ovarian cysts, they are fluid-filled sacs which grow on the ovaries in women. They are common and usually are symptomless, but they can occasionally cause problems. Most cysts clear on their own and you are unlikely to need treatment for them. 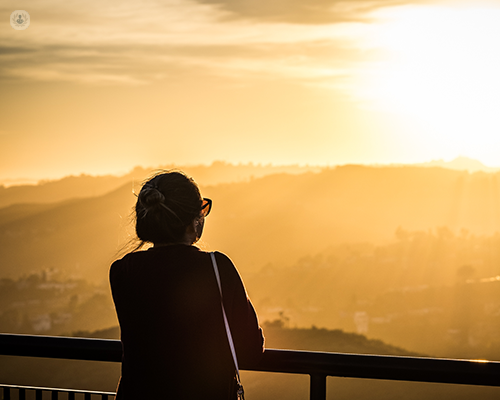 The cause of cysts can differ, depending on the type. Functional ovarian cysts occur because of the menstrual cycle, and are common if you haven’t yet been through the menopause. In a woman’s body, eggs are formed inside the ovaries in something called a follicle. When the follicle doesn’t release the egg as it normally does each month, or if the fluid inside it is not released, it can swell – which causes the cysts. This type of cyst is benign, meaning it is non-cancerous.

Pathological cysts, on the other hand, can develop both before and after menopause as they are caused by abnormal cell growth. Sometimes these cysts can be cancerous.

Certain conditions can also cause cysts to form, including endometriosis and PCOS (polycystic ovary syndrome).

What are the symptoms of ovarian cysts?

Ovarian cysts may not cause symptoms at all, but if they do, you may experience symptoms such as pelvic pain, bloating, and a feeling of heaviness within the abdominal area.

What is the treatment for ovarian cysts?

Most cysts go away on their own and your doctor will adopt a ‘watchful waiting’ policy, which means the cysts are monitored and checked at a later time to see if they have indeed gone. If scans show the cyst has gone, treatment is not necessary.

However, if cysts are causing symptoms, or if they are particularly large, then treatment may be necessary. Cysts can be removed through surgery, which is often performed as a minimally-invasive procedure. If the cyst needing removal is cancerous, then additional tissue may need to be removed, and in some cases, both ovaries and the womb.

If the cysts are caused by an underlying condition, then the condition itself will also be treated or managed.

Any cookies that may not be particularly necessary for the website to function and is used specifically to collect user personal data via analytics, ads, other embedded contents are termed as non-necessary cookies. It is mandatory to procure user consent prior to running these cookies on your website.